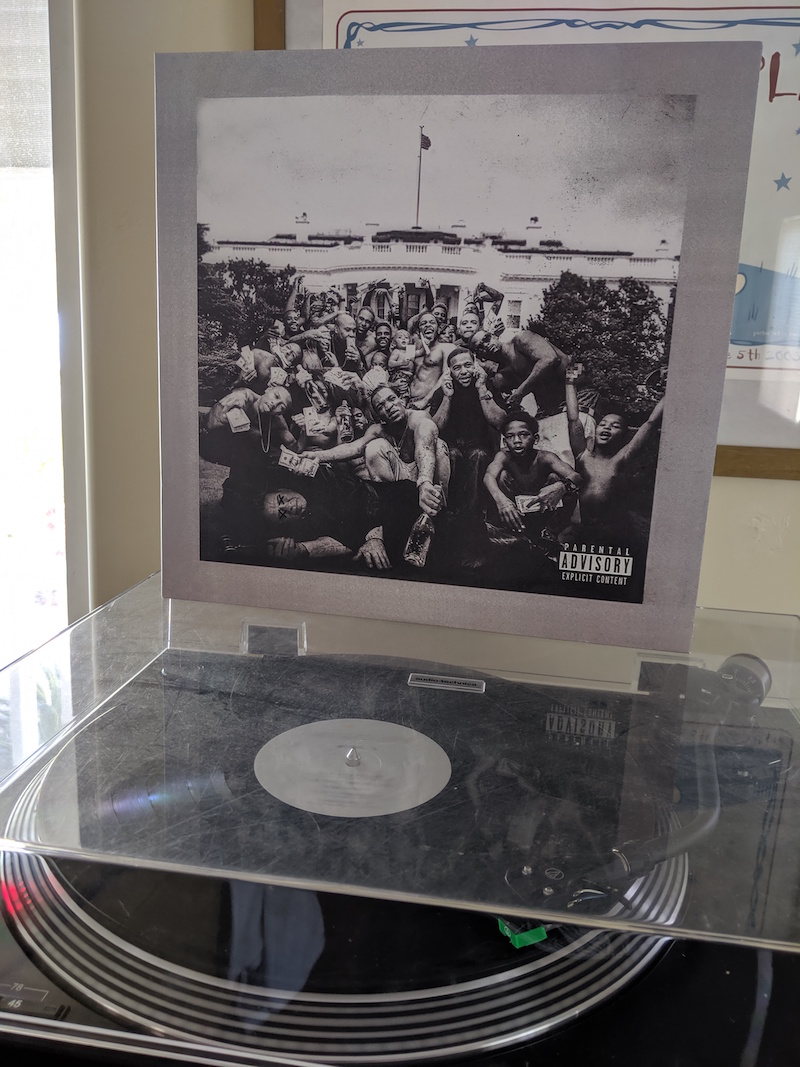 Two years ago, my wife and two friends of ours and I all went on something of a field trip to go see Kendrick Lamar in concert, along with SZA and a rotating but not-enough-stage-time list of Top Dawg acts that included Schoolboy Q and Jay Rock. We each shelled out probably too much money for can’t-see-shit lawn roaming up in the nosebleed section of the arena, learning how out of shape we were after climbing what felt like 1,000 seats, and talking a lot of trash about the other drivers trying to leave the clusterfuck of a parking lot. (Actual exchange in the car: “look at these hoopleheads!” “Hoople…heads?”)

But! It was a blast, and honestly the bonding over climbing too many stairs and the pain-in-the-ass parking lot was all part of it. But the reason we were there was Kendrick, and he didn’t disappoint. When K-Dot showed up, flanked by giant flames, on top of a screen that read “Pulitzer Kenny” and leapt into “DNA.”, my wife said before the song was done, “OK, this was worth it.”

I can only say good things about Kendrick’s performance, but if there was anything to be disappointed over—IF—it was that only two songs from To Pimp a Butterfly made it to the setlist. And they’re exactly the ones you think they are: “King Kunta” and “Alright.” I mean, it makes sense. In a giant stadium show where the music moves fast and the entertainment value has to be maximized (particularly when the artist performing has a newer album out), you probably don’t want to spend too much time on the weird, experimental album. But a few years prior, I regret missing out on Kendrick’s “Kunta’s Groove Sessions” tour, where he played smaller venues with a live band. I don’t know if I could have even gotten tickets to see that, but when he came to Southern California, I was out of town, so it’s a moot point. But that would have been a hell of a thing to see—in fact there’s a full set on Youtube, and even though the audio isn’t great, it’s kind of amazing.

See, To Pimp a Butterfly is one of those albums that you don’t just listen to, you experience it, you ponder it, you theorize over it, you think about it even when you haven’t listened to it for a while. It’s a complicated album, and it’s an album you can’t fully process on first listen. For that reason, everybody—and I mean EVERYBODY—has an opinion about this album, some of which are totally dumb. (After it came out and got a lot of acclaim, someone wrote the “You don’t actually like this album” hot take, which is nonsense.) I understand people preferring other Kendrick albums, I understand not quite being able to sink your teeth into some of these songs. For someone who sells millions of records and makes it to the top of the charts, this was an incredibly bold move. Less a hip-hop album than a jazz fusion/funk record with rapping, To Pimp a Butterfly isn’t what you want or expect it to be, and that’s in large part why I love it. (There’s also this weird thing about hip-hop where the tired rockism/poptimism argument keeps coming into play, subliminally, and it results in some unwarranted hyperbole either way, but I digress…)

There are things about this album that, frankly, make for some abrasive or uneasy listening. For instance: the “interview” with Tupac at the end, or the jazz poetry interludes, or the weird vocal affectations Kendrick makes sometimes like he’s auditioning to be on a Sonny Sharrock album. (There are far more editable moments on My Beautiful Dark Twisted Fantasy, but that’s a conversation for another time.) Not for everybody, certainly, but there are so many just simply dazzling moments on this record that it’s hard not to be in awe of what Kendrick accomplishes here. “King Kunta” is an absolute slapper, referencing James Brown and Parliament while declaring himself a monarch, and “Alright” became THE most important song of 2015 when it became an anthem for Black Lives Matter. “These Walls” and “Complexion” are both personal favorites of mine, taking more of a fusion/smooth soul sound, complete with Thundercat basslines, and “How Much a Dollar Cost,” if I’m remembering this right, was Barack Obama’s favorite song of that year. (Also, how great is that album art?)

I’ve listened to this album a lot, and there’s a lot about it that I’m woefully unqualified to speak about—particularly regarding Black fame, of which I have absolutely zero experience either way. But this album resonates with me regardless, because it’s constantly giving me something to think about, to hear differently, whether it’s Kendrick’s internal monologue (which is every song, really) or some of the wilder musical choices. Plus this album helped to raise consciousness of one Kamasi Washington, which was a great public service from Kendrick Lamar. (Though Kamasi was already coming up in L.A.’s jazz scene. Plus he did a Snoop record, if I recall)

My favorite artists are those that are always changing my perception of their music, or music in general. Kendrick already did this once with good kid, mAAd city, and then he did it again three years later. (He didn’t do it with DAMN. That record rules, but it felt more like a hit-packed encore.) I’m not sure any other record in the past decade has done more to twist my brain than this one, so go ahead and scoff at that score below if you must, but Kenny earned it.