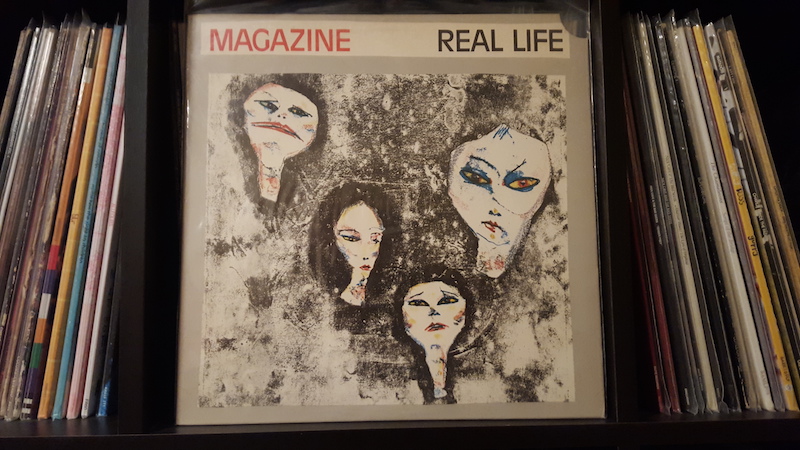 I love a good guitar riff. That’s in large part because I play guitar—I love playing a good riff, and I love trying to come up with one, and frankly, it’s the most fun part of doing it. When you start ripping through a good riff, you’re having a blast. And if anyone’s listening to you, they probably are too. But I also love listening to a good riff. It’s not everything, of course, but if a song has a killer riff, I’ll probably like it. I mean, anyone who read my entry on Blue Oyster Cult earlier this year probably already know that.

My favorite riffs aren’t generally part of the classic rock canon though. Some of them are, and several hundred entries from here, I’m going to get into some seriously dorky stuff about some mainstream rock records from the ’70s and ’80s that make me go from zero to Dad Rock in mere seconds. But I love the darker, more abrasive, weirdo art records most, of course, and to my ears there are few guitar riffs better than Magazine’s “Shot by Both Sides.”

There’s nothing super complicated about the song—it’s three-chord post-punk, with a lot of urgency and intensity. And the riff itself is basically just an ascending scale with the right amount of tension and suspense thrown in. But that’s kind of the secret of great songwriting. It doesn’t have to be complicated, it just has to do something simple in an interesting way. And every time I hear this song, I feel like sprinting or jumping or punching things, and it feels great.

Radiohead agrees, in fact. When they wrote their 1995 song “Just,” from The Bends, which has a similar melodic motif, they admitted that they were inspired by “Shot by Both Sides,” and they’ve even covered the song live. I’m not saying that everything Radiohead does is necessarily unimpeachable, but that’s a damn good start right there.

It’s not the only song on the album that’s great, nor is it even the first from Magazine that I had heard (that’d be the decidedly more goth “The Light Pours Out of Me”). And in DJ sets or in mixtapes, I like to drop in “Definitive Gaze” a lot, because it’s so damn funky. The combination of all these classics made Real Life one of those albums that, even back in my early vinyl collecting days, I always hoped I’d find in a used bin. Of course I never did, but it was always on the list regardless.

Finally, in fall of 2014, I said “fuck it” and just ordered a used copy online. Well worth it. And now the riffs are always there to be played again when I need them.