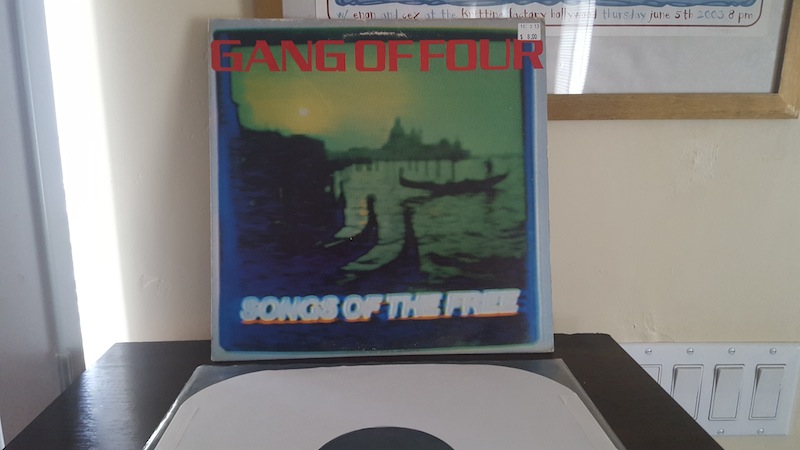 As an epilogue to the story of my DJ origins yesterday, once my turn was up, the next in line was David J. Yes that David J. Legendary bassist of Bauhaus and Love and Rockets. He DJed right after me, which was a weird and cool thing that happened. There’s a picture of us together somewhere.

However I did take the time to do a little vinyl shopping afterward, but only picked up one thing: Gang of Four’s Songs of the Free. It didn’t cost much and it’s an excellent post-punk-funk album, and one of three of the group’s essential recordings. I saw them when they reunited back in 2005 and it was a killer show, but everything since has been a bit of a decline, including their most recent incarnation, which isn’t really Gang of Four at all. It’s Andy Gill and three other dudes.

In any case, as I ended up DJing a lot more after this, Songs of the Free became a regular staple in my repertoire. In fact, “I Love a Man in a Uniform” is one of the greatest hits of my now-on-“hiatus” goth night, St. Vitus Dance Party. It was weird in a way, because a lot of the songs I thought would get people moving like crazy sometimes didn’t. Though there wasn’t any rhyme or reason to it. It simply depended on the night.

But “I Love a Man in a Uniform”? Every. Single. Time. People would get the fuck down. Made me smile, even though that sort of thing is, ahem, frowned upon in a goth club.

2 thoughts on “Autobiographical Order No. 222: Gang of Four – Songs of the Free”